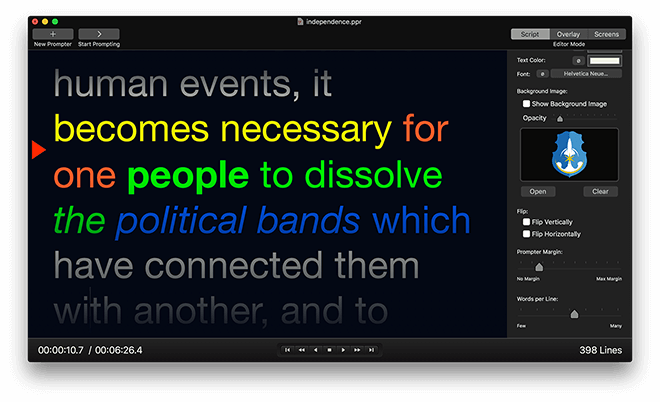 Curious what changed from version to version? Here you can find the complete Power Prompter changelog.

If you're unsure about a change or have a general question don't hesitate to contact our support!

This update improves compatibility with the upcoming macOS 10.14.5 update.

This update fixes the Keyboard Shortcuts window. The window will now display correctly on all systems.

Improvements:
Bugfixes:
A note from the devs: We usually don't want to "spam" you with updates but the bugfix for the performance issue was too important to hold the update back.

After adding support for .doc, .docx and .rtf file import we got a lot of feedback by users who were complaining that their imported scripts didn't line up between editor and teleprompter windows.

After some investigation we found the cause to be MS Word and other word processors adding special control tags to their documents which were meant for printing control and would display fine in the editor but would confuse the teleprompting engine.

That’s why we reworked the document import feature to now strip all style tags and just to import the raw text. All custom font settings, colors, sizes and font styles will now be ignored by Power Prompter when importing documents from other applications.


If you think you have an idea how Power Prompter can be improved or you found a bug please dont hesitate to contact us: support@suborbital.io

You can now export your scripts from Power Prompter to these file formats via the "File -> Save As…" menu. Please note that MS Word ignores background color attributes and sets your script's background color to white. MS Word also ignores most formatting in "Print" or "Outline" mode. You should switch to "Web Preview" mode to display your script correctly.

If you want to keep maximum compatibility we suggest you export to RTF or Plain Text format as this can be read by most word processors without any issues.

We have also fixed a bug in the trial version which would limit the trial to approximately 4 days instead of 30 days. If you had this problem please apply this update as all trials have been reset to 30 days.

Please refer to our blog post about the details as there are some limitations to this functionality: Click here to visit our blog.

We also fixed a bug that would prevent changing font colors in some instances.

This update fixes a bug that would end the 30 day trial in less than 30 days.

Power Prompter 2.0 is here. With many changes under the hood that improve performance and stability. And a new feature that lets you create custom key bindings to control the teleprompter.

This version also changes the licensing system to a completely offline one. No more online activation needed - now you can run Power Prompter on Macs that are not connected to the internet and won't be bothered by the app asking you to re-activate it.

The licensing change should be completely transparent to all users. If you experience any issues (the app claiming not to be activated) please contact us.

You can read more about this change on our blog: https://suborbital.io/blog/upcoming-licensing-changes-power-prompter-2-0/

Oh, before we forget to mention it: This update is FREE for all our current customers! We felt a little bad for not adding many new features so we decided to make this major update free for all existing customers. :)

We added a speed lock button to the teleprompter window. This button toggles whether you can change scrolling speed via the speed slider. Useful to prevent accidental speed changes.

We're going to switch the licensing system soon. Please install this update to make your copy of Power Prompter ready for the new system.

Installing this update will make sure that your copy of Power Prompter will keep its "activated" status and you won't have to re-enter your license key again.